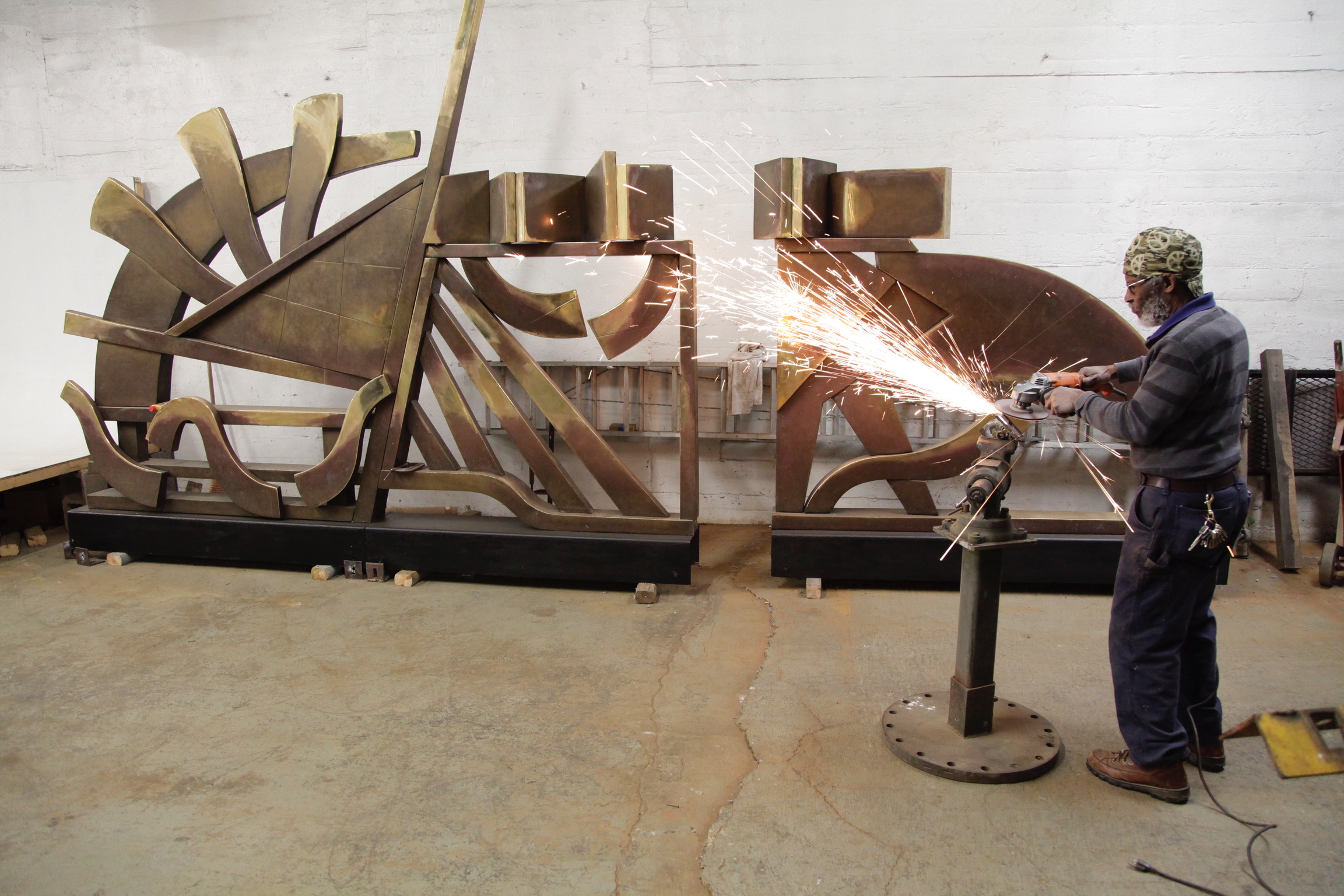 Patterson's work celebrates a legacy of resilience and transcendence.

The mood was both celebratory and somber when 200 people gathered at Serenbe’s Deer Hollow Park recently to watch the unveiling of Curtis Patterson’s Serenity for Shango. Nestled in a cathedral of trees off a wooded footpath, the stainless-steel monument measures 9 feet tall by 5 feet wide and is complemented by five Ashanti stools that encircle the primary figure — a Yoruba deity who symbolizes thunder and lightning.

“I feel compassion,” saidJamila Canady, an actor, playwright, educator and retired program coordinator at Spelman College’s Office of Alumnae Affairs, as she settled onto one of the stools. “I feel comfort. And I feel love.”

Weighing in at 2,000pounds with a total diameter of 27 feet, the site-specific installation incorporates symbology from Nigeria, Ghana and Guinea. All that power and might not withstanding, Patterson’s intention was to create a gathering place where people could connect with one another and contemplate the miracle of nature in a tranquil setting.

Canady clearly got the message. She smiled as she rose from her perch to join a multi-generational mix of friends, family, neighbors, patrons, artists and arts administrators who drew close and could not resist the urge to caress Shango’s gleaming skin (in polished and brushed finishes), her curvilinear lines and intersecting planes.They admired Patterson’s deft nod to modernity and antiquity in design.

Despite upper elements of the installation being out of reach for most, their upturned faces reflected both curiosity about and reverence for the silhouette of a Nimba mask (used by Baga people of the Guinea Atlantic coastline in dance ceremonies to produce fertile crops) that bisects Shango’s visage; double irons (symbolizing domestic and manual labor by enslaved Africans in the Americas); and dual handles of a plow that towered above. (The plow handles are intended to mimic the welcoming gesture of outstretched arms.)

“I wanted to cultivate the minds of people about West African culture,” says Patterson, a retired professor who taught sculpture and design at the Atlanta College of Art for 29years.

Recognized for his mastery of alloys, including bronze, stainless steel and corten steel, his commissions can be seen at Hartsfield-Jackson Airport, Ohio State University’sJesse Owens Memorial Stadium and Minnesota’s State Capitol grounds. He’s also known for the “Easter eggs” embedded in his public art projects, which lead to“aha” moments for anyone patient enough to look closely.

“The impetus for this commission was to recognize the current and future need for diversity within the community of Serenbe,” says Dr. Richard W. Cohen, who has lived in theSouth Fulton hamlet with his wife since 2008. “It takes more than verbiage — it takes symbolism to encourage people to understand that diversity is necessary for a wholesome community.”

Inspired by conversations about race in America that were triggered by protest marches in the spring of2020, a core group of 13 Serenbe neighbors formed a committee that summer to concretize their commitment to the concept of radical hospitality: an open door, a place to dwell and a metaphorical gesture that says, “I’m glad you’re here,” to residents and visitors alike.

When The Black ArtProject was announced a few months later, buy-in was immediate. Roughly one quarter of the 425 resident families pledged financial support. Many gave before being asked, and several early-adopters said they’d happily give even more money than they’d originally donated to help reach the committee’s fundraising goal of $135,000 as quickly as possible.

A jury of sevenAtlanta-based professionals, including architect Phill Tabb, was assembled.They judged the submissions of the 10 artists who were invited to submit proposals that would pay homage to the lineage of African American culture inGeorgia.

According to Kevin Sipp, who served as jurist, the vote was unanimous. Patterson — one of three finalists — won hands down.

What resonated for Sipp, project supervisor for the Mayor’s Office of Cultural Affairs, was that Serenity for Shango could be read from any angle and retain its beauty as a sculpture-in-the-round. As the inaugural crowd demonstrated, walking around the piece demonstrates that viewers can face any direction — forward, backward or sideways — and still appreciate the artistry.

The other consensus aboutPatterson, whom Sipp describes as “impeccable in his humility,” is that he gifted Serenbe far more in quality than the $80,000 prize awarded for his submission. (The balance of the budget was designated for finalist prizes, land prep, transportation, installation, maintenance and upkeep.)

In coming days, a marker will be placed at the base of the sculpture describing the piece in Patterson’s words, along with a QR code that will provide the link to a documentary about The Black Art Project byAtlanta-based filmmaker Kenson E. Burton.

Wanda Hughes, a metalsmith, jewelry designer and committee member who recommended Patterson tot he selection committee, falls silent when asked to describe the sight of Serenity for Shango after dark. A shining beacon by day, the piece takes on a spectral, ethereal quality at night — bathed in lights suspended high in the surrounding tree canopy that mimic the radiance of a moonbeam. Hughes takes a deep breath, composes herself and apologizes for being at a loss for words. The tears pooling in her eyes, however, make talk seem superfluous.

At the other end of the spectrum is Hannah Brandes, a founding committee member, who can’t say enough about getting to observe an artist at the height of his ability.

“What Curtis has created and who he is are one and the same,” says Brandes. “He’s 78 years old, put in14-hour days over nine months [while a retrospective of his work was on exhibit at Laney Contemporary in Savannah], delivered his work ahead of schedule and happens to be one of the most lovable humans walking theEarth! I didn’t know I was going to fall in love in the process, but my husband, Herb, says that my voice changes whenever I talk to Curtis. Everybody who meets Curtis falls in love with him.”

While Sipp recognizes an opportunity for enchantment, he also sees the potential for human enrichment once visitors decipher the symbolism and meaning behind Patterson’s sculpture, contemplate his elegant reconciliation with an ignoble past and consider the significance of a new contribution to the South’s cultural canon.

“Human beings have always aspired to mark their space in history with public monuments,” says Sipp. “What makes Serenity for Shango doubly important at this time is that Curtis Patterson has created a monument that celebrates a legacy of resilience, transcendence and African spirituality— which, I think, is all important in a culture that has spent a good part of its history trying to suppress, deny or disrespect the contributions of Africans in the Americas.”

Serenity for Shango—  located at the Atlanta Newnan Road entrance to Serenbe —is open to the public seven days a week.‍

Gail O’Neill is an ArtsATL editor-at-large. She hosts and coproduces Collective Knowledge  a conversational series that’s broadcast on THEA Network, and frequently moderates author talks for the Atlanta History Center.