Check out the Article

Andrew Nemr is a Lebanese, faith-driven artist, a tap dancer-storyteller who began training at the age of 3, just after his parents fled war-torn Lebanon to live in the United States. At age 9, after seeing the film Tap, Nemr told his parents he wanted to meet one of the film’s stars, Savion Glover. Two years later, that dream became a reality and provided the fateful turn that would propel Nemr to mesmerizing success, mentored along the way by the likes of Glover himself and the legendary Gregory Hines.

The Art Farm at Serenbe, in partnership with The Flying Carpet Theatre, will present a return engagement of Nemr’s Rising to the Tap, April 28–30 at 8 p.m. (Nemr was at Theatrical Outfit in July 2019.)

His one-man show Rising to the Tap is a riveting and critically acclaimed telling of a journey that brought Nemr to terms with his identity as an artist, immigrant and consummate outcast in Alexandria, Virginia. By his own admission, the work is 60 percent theater and 40 percent dance, co-written with his collaborator Adam Koplan and scored by musician Or Matias. It has evolved, he said, since Atlanta audiences saw it three years ago.

Swap out some dates and locales and I discover that Nemr and I share an almost identical past. I felt privileged to talk with him (via Zoom) about his work and his artistic trajectory. Together we unearthed a mirror-image philosophy on “being.” I soon recognized the similarity of thematic content that underscores both my and Nemr’s work and decided to dig deeper into the starting point of such a large tale.

Rising to the Tap offers insights into the assimilation challenges many of us can and do face. Nemr’s unique and deeply personal telling of his journey is accompanied by a potency that ushers viewers, if inclined, into a relatability that has the power to land hard.

Nemr openly acknowledges the power and fragility of this work at this time. Speaking to social justice, race relations and the peculiarities of the world’s current state of affairs, he sees how it can be challenging to reveal a truth that was born at a different time. While Nemr carries the noble histories of his teachers in his body, he also questions their occupancy. As in:  Can he claim something that isn’t inherently indigenous to his roots?

Through unabashed honesty, Rising to the Tap grapples with the flurry of opportunities that were extended to Nemr as a young prodigy, each opening a door that led to recognition and admiration.

A noteworthy step forward was Nemr’s inclusion in Glover’s Washington D.C. Crew, which performed extensively in three annual residencies. With equal verve, the narrative of Rising to the Tap shifts to a time when Nemr could no longer rely upon the elements of his success. The sting of that lodged in his young heart. Much of what he cherished was unceremoniously stripped away. Thanks to these and other seismic shifts, Nemr was inspired to establish his own tap dance company, aptly named Cats Paying Dues.

Within the work, viewers will have the opportunity to figuratively travel across continents, visit unsettling times, swoop around dreams that came true and learn of ideas that fell flat. In all the topsy-turvy machinations of a life and consequently a work, Nemr seems at peace today. He never suggests that his past has chipped away at who he is now. In fact, he seems more inclined to posit that the past is like clay, sculpting material that has shaped who he (gratefully) is.

I asked Andrew what he thought about Jean Racine’s idea that: “Life is a comedy to those who think, a tragedy to those who feel.” Nemr, without missing a beat and referencing his faith, said: “I’d like to add one more line: It’s a wonder to those who believe.” 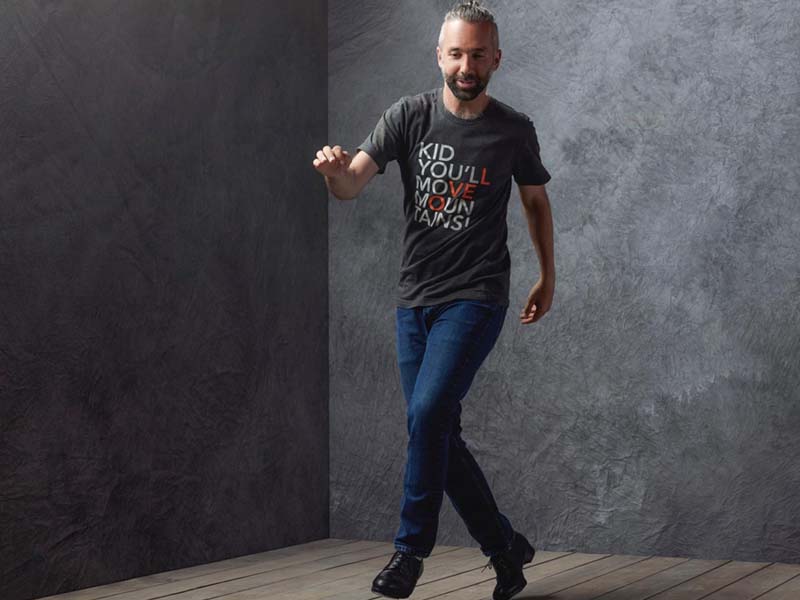