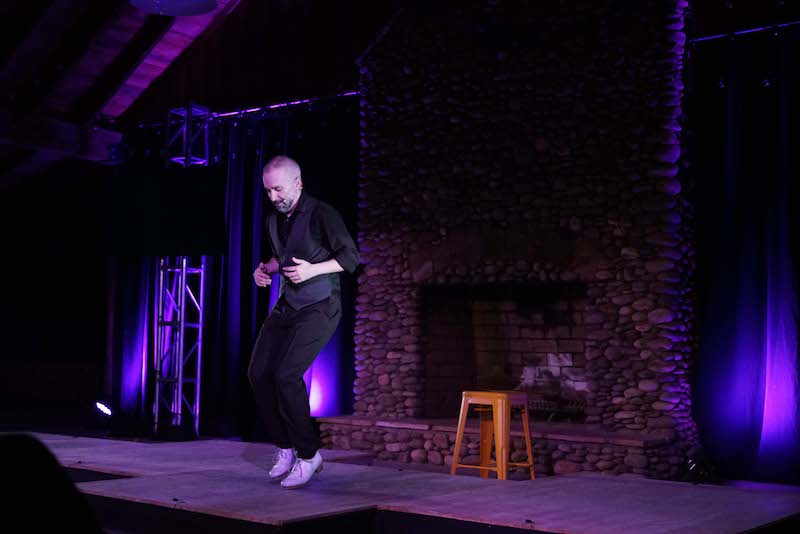 A tap dance memoir told through the art itself:

“Andrew is one of the elite dap dancers in America,” said Koplan. “He came up as one of the young dancers in Savion Glover’s crew and trained with that through his teen years. And during that era, it meant that … he was also getting input from many of the great and legendary figures in tap dance, including Gregory Hines and Jimmy Slide. And what this means for Andrew, in a craft where legacy is very important, is that Andrew can trace his lineage all the way back to the origins of tap dance.”

He continued, “What it also means is that Andrew has this incredible story to tell about his coming through this era and the ups and downs of what it meant to be a child of people escaping from war-torn Lebanon and being kind of tossed around the world in that way. And then he shows up in the US feeling very much like an outsider and with a lot of identity crises, and then a lot of those melt away in the warm embrace and the warm community of tap dance.”

“One of the things that we share in the show … are experiences in which the division of race, the natural kind of line that gets drawn, affected personal relationships that I had, and it’s all intertwined, right?” said Nemr. “The joy and the pain that comes from living life together with people is all there … When I come to lace up my shoes and dance, how do I honor the people that gifted me with the knowledge that I have, the foundational knowledge that I have in the craftwork in tap dancing, while also moving forward in my own life?”

“One of the things that’s really clear in the show is how intertwined professional life and personal life is for Andrew. Some people would be like, ‘I wasn’t in a show, I’ll be in the next show.’ but when you’re 17, 18, 19 in that era, what your friend group is, and who gets to be in the show, is such a porous line,” said Koplan. “Part of Andrew’s growth is being able to separate out those things. So I think a lot of the pain isn’t about an artistic choice so much as what happens when an artistic choice impacts personal relations.”

How tap communicates more than just music and movement:

“I came up as a tap dancer, learning and understanding how tap dance can be a vehicle for storytelling, even if there aren’t any words. The way the dancers that I was around, as I was coming up, would talk about the dance in a rehearsal room or in a practice situation was the same way that I heard writers talk about writing,” Nemr said.

“Before I started to develop this show with Adam, I had played around with starting to talk while it’s happening, simply on account of the fact that I wanted to try and find ways to share all the things that I knew with an audience that wouldn’t be able to see it without having another doorway in,” said Nemr. “It’s been a tremendous, tremendous journey. It’s a task; it’s a very, very heavy lift … Going back through and having to encounter some of the harder stories of one’s life over and over and over again … is not necessarily the thing one would ask for in a normal situation, but it has been exceptionally fruitful in my life.”

Tickets and more information about “Rising to the Tap” onstage at Flying Carpet Theatre Company from April 28-30 are available at flyingcarpettheatre.com/rising-to-the-tap. “City Lights” listeners can get a discount if you use the code at Eventbrite checkout: CITYLIGHTS15